Slovak Telekom and T-Mobile Czech Republic Chief Technology and Information Officer Branimir Maric is using his more than two decades' experience in telco, including 15 years in various management roles, as the basis for his opinion on how the transition to fiber-to-the-home and 5G will be long and challenging.

This transformation is, after all, one of the largest the industry faces in 20 years. And its impact will be far-reaching and eventful throughout industries, economies and countries. It's a topic Maric has pondered extensively and plans to discuss during a presentation during Broadband World Forum in Amsterdam, October 15-17 October.

Broadband World News: Telecoms is set for its biggest network overhaul in over 20 years. How do you view its previous years of transition?

Branimir Maric: Over the last five to ten years, telcos have been working a lot on promoting some new and flashy customer-attractive technologies -- things like 4G, IoT, NFV, cloudification, etc. -- which have gained a lot of media and market attention. At the same time, unbeknownst to many on the outside, they were also transforming themselves. Sometimes these transformational changes looked easy to implement, but actually were quite difficult and demanding. For example, many telcos have had difficulties in transforming their legacy networks like PSTN/SDH, and I would say that this is only the tip of the iceberg. Typically, even the non-incumbent telcos (like MNOs) have a deep legacy of technical debt in NT and IT platforms and processes that have to be transformed. Simultaneously, there was pressure to innovate with network functions virtualization or cloud infrastructures and digitize IT. Doing transformation and innovation at the same time was one of the most difficult things for the telcos in this existing transition.

BBWN: With such a range of techs like 5G, WiFi 6 and 10G PON, where do you think the future of next-generation networks lies?

BM: I think next-generation networks will be all about FTTH and 4G/5G combination. In the next five years I predict we will see the beginning of the transition from metallic access networks to fiber access networks and 4G/5G. What kind of access will be built, or will be made available in a particular area, will depend on a number of socio-economical, legislative and technology factors, but I think most of the telcos will try to roll out or get access to as much fiber as possible, much deeper in their topologies than they used to. These will be driven by both FTTH and 4G/5G customer-related demand.

We will definitely see the sun setting on DSL technologies, even though VDSL will survive midterm -- but not longer. I think there is also going to be no regret moving to 10G PON for all operators who will be deploying new FTTH coverage in the next three to five years. I also believe symmetrical 10G PON might become of wider interest for mobile and B2B use cases. I don’t think 5G will be a credible single-access platform for nationwide fixed coverage in the next five years or so; rather, it will be a supplemental access technology when it comes to fixed wireless use cases. Today, some of the economic aspects of deploying 5G are quite disturbing I have to say, and whether or not 5G communities will overcome that remains to be seen.

BBWN: What is driving the demand for fixed-wireless access?

BM: Clearly, it's driven by a lack of high quality or higher speed fixed broadband coverage, but also by increased convergence of fixed and mobile services (FMC). This runs true especially in countries with no clear FTTH focus or strategy. But even in countries with such a strategy, there are always white spots that are difficult to cover by FTTC or FTTH -- or even basic ADSL. Many telcos in the European Union have built pretty good 4G networks with wide coverage, something often mandated by the government in auction conditions. If such 4G networks are not overly utilized, which could be the case, they see their chance in selling the spare capacity as FWA. The problem starts to appear after a while when FWA traffic becomes the main driver for the capacity upgrade of 4G. Also, many providers, especially MNOs, have seen FWA as a way to compete in FMC or fixed areas, even if they do not own a fixed line infrastructure.

BBWN: Building on that, what technologies are vital to ensuring connection quality?

BM: Well, it is a lot about ensuring the right kind of customer experience in areas where this is important. Technologies that are relevant to manage it these days are the likes of LTE Customer Assurance tools, RAN Quality of Service management, RAN policy control, fiber backhaul, remote management for FWA CPEs, inter- and intra-site mobile traffic steering, big data and so forth.

BBWN: How do you envision 5G and FWA working together in the future?

BM: 5G is here to help 4G battle some of most congested areas that are typically being driven by FWA usage. I think many of the highly congested cells will be the first ones that will experience upgrades to C-band or mm wavelength bands on 5G in the short term. Economics of it will, however, remain difficult midterm. I see 5G in many other areas, also in low and mid band frequency spectrum, rather as an evolution of 4G.

BBWN: Finally, is the industry moving fast enough to develop and deploy these solutions? If not, what would be your call to action for the industry?

BM: Well, I think that the transition to FTTH and 5G is going to be a long and difficult -- especially with FTTH, where the rollout is more like a marathon then a regular race. FTTH construction is at best going to be a one to two-decade-long endeavor in many countries, one quite sensitive to red tape and legislation hurdles, with many different operational challenges that operators must overcome. Some countries were smart enough to construct a wide infrastructure of pipes and ducts in the old days, which they can now reuse for FTTH. These are typically those countries that are now leading the FTTH pack and where rollouts have been executed in five to seven years by heavy reusage of existing duct infrastructure. They are also talking a lot about decommissioning of metallic or copper access networks.

Decreasing red tape and creating strict timing response obligations for all communal participants to accelerate the legislation process would be a major help in the context of FTTH construction. 5G is seen by many as a quick win substitute for FTTH, precisely because of avoidance of these issues. However, in order for this to be a reality, overall economics of 5G deployment needs to be much better in areas such as 5G RAN hardware and software costs, frequency fees, MMIMO antenna energy efficiencies, availability of cheap fiber backhaul and 5G CPE costs.

WANT TO SEE BRANIMIR MARIC AT BBWF? SAVE 20% ON YOUR DELEGATE PASS!

Joining experts from Hyperoptic, the Wireless Broadband Association and Assia, Branimir will be taking to the stage to discuss Fixed Wireless Access and shine a light on how operators balance demands from FWA with meeting customer needs, the synergies between FWA and 5G, how organisations can remain flexible and dynamic to market changes, and more...

Use the link below and you'll receive an exclusive 20% for reading our speaker interview! 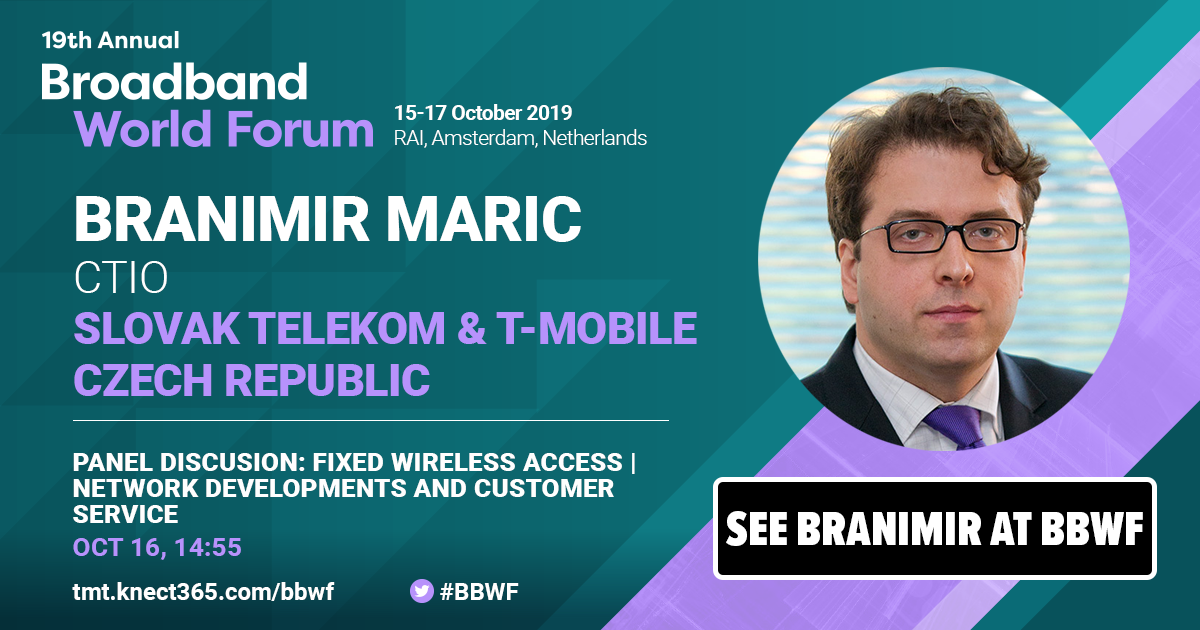 GET YOUR DISCOUNTED DELEGATE PASS